Skip to content
This site uses affiliate links, meaning that if you make a purchase through our links, we may earn an affiliate commission.

Ohio is one of the best places to visit if you are interested in scenic landscapes, down-to-earth people, and cozy small towns. But, you also need to check out the beautiful Ohio covered bridges scattered throughout parts of the state.

It is possible to drive across many of these covered bridges in Ohio, but a lot of them are open to pedestrians and bikers. Along these bridges, you will be able to see gorgeous views of Ohio’s rivers, valleys, and mountains.

In this article, we will discuss some of the most popular covered bridges in Ohio that you should be sure to visit. Have your cameras ready!

Let us know if we missed any famous Ohio covered bridges in the comments! Thanks!

It was constructed upon Smith’s 1869 patent, and today it is a rare gem showcasing 19th-century wooden bridge technology.

This 71-foot-long and 14-foot-wide bridge were restored for pedestrian and vehicle traffic in 2000. Johnson Road Covered Bridge has been listed on the National Register of Historic Places since 1984.

It is a two-span wooden truss-covered bridge originally built in 1863 by John Shrake of Newark and named for Congressman William Helmick of Tuscarawas County.

During the early days, the bridge played a significant role in trade in the village of Helmick and was mainly utilized by farmers to get access to two nearby grist mills.

Helmick Covered Bridge was closed in 1981 due to falling into decay and was restored later in 1996, costing over $250,000, which was collected by the locals. Since 1975 the bridge has had its unique place on the National Register of Historic Places.

Spanning Mill Creek in Jefferson Township, Netcher Road Covered Bridge is one of Ashtabula County’s newest and currently 17 drivable covered bridges that was opened to traffic in 1999.

This is a 110-foot-long and 22-foot-wide single-span covered bridge that features timber arches with inverted Haupt walls. The project began in 1998 and was sponsored by the ODOT Timber Grant.

The main highlight of the bridge is its unique Neo-Victorian design. Make sure to have your camera with you for this drive (especially in the fall) to capture its unique beauty as well as surrounding vibrant foliage.

Take your time driving across the bridge and taking in surrounding spectacular views.

Nearby you will find Indian Trails Park, which offers a trail system just beneath the bridge at the Ashtabula River Gulf, where you can appreciate the beauty of the Bridge from all sides.

The bridge opened to full road traffic in 2008 and is expected to last around 100 years.

Being one of only five remaining covered bridges in Columbiana County, Teegarden Covered Bridge, also known as the Centennial Bridge, was built in 1876.

It was named after U. Teegarden, who owned property close to the bridge. After being bypassed in 1992 and restored in 2003, the photogenic bridge is currently only open to pedestrian traffic.

Teegarden Covered Bridge has been listed on the National Register of Historic Places since 2010.

It is said to be a replacement for a log bridge that was constructed in 1856 on the same site. This 117-foot-long and 24-foot-wide three-span truss bridge was constructed over the east branch of Mahoning River in 1831.

The latter is now mainly used to get a closer view of the bridge and appreciate its unique town lattice truss style.

Trucks are prohibited. Newton Falls Bridge was proudly added to the National Register of Historic Places in 1974.

The Bridge of Dreams

The 370-foot Bridge of Dreams is the second-longest covered bridge in Ohio and the third-longest in the US.

Spanning the Mohican River along the Mohican Valley Trail in Union Township, the bridge is perfect for walking, hiking, biking, or simply taking in the surrounding gorgeous scenery.

Originally built in 1920, the Bridge of Dreams mainly served as a railroad bridge and later in 1998 turned into a covered pedestrian bridge.

Everyone believed that the “covered bridge” project would fail, but its successful completion led to the current name of the bridge and made this a symbol in the community.

Tucked away in Mill Creek Park near Youngstown, the bridge crosses Mill Creek allowing access to Lanterman’s Mill as it did back in the 1800s.

Taking a walk on the old planks along this 96-foot-long bridge located upstream of the old mill will make you experience the historic charm of the site.

Nearby you can admire the lovely views of Lanterman’s Falls, visit Mill’s gift shop, and enjoy the scenic hiking trails.

This 136-foot single-span bridge was built in 1868 in the Howe Truss design and is currently one of the 16 drivable bridges left in Ashtabula County.

A unique wooden interior will certainly make you travel back in time. The bridge was refurbished in 1984 with the help of three volunteers and four college students.

Crossing Furnace Run at Everett Road in Peninsula within the Cuyahoga Valley National Park, Everett Covered Bridge is the only surviving covered bridge in Summit County.

Built in the 1870s in Smith Truss design, it had a significant role in the transportation system for the Ohio & Erie Canal in the 19th century.

Legend has it that once, a farmer and his wife tried to cross the Furnace Run on a cold winter’s eve but didn’t make it.

And now, the bridge is said to be haunted by their ghosts. The bridge was rebuilt at least twice following substantial damage, first from a flood in 1913 and later by a truck in 1970, but a historically accurate reconstruction of this bridge was completed in 1986.

Currently, this scenic relic from a bygone era is open only to foot traffic.

Built in 1983 across Conneaut Creek in Monroe Township, the State Road Bridge was the first covered bridge designed and built by County Engineer John Smolen, Jr.

This is a 152-ft single-span Town lattice bridge that is now one of 16 drivable bridges in Ashtabula County.

The bridge is made of 97,000 ft of southern pine and oak and features a 4-ft-tall window that stretches from one end to the other, showcasing the unique Town lattice construction.

The Covered Bridge Festival had its start with the bridge’s dedication in 1983.

This wooden bridge is nestled in a picturesque setting, allowing you to admire its beauty even walking through the creek below. It is open to vehicle traffic with limited roadside unpaved parking.

The Rinard Covered Bridge, sometimes referred to as the Hendershott’s Ford Bridge was built in 1876.

It is one of the three covered bridges that span the Little Muskingum River in New Matamoras, Washington County. The bridge was constructed by H. H.

Townsend in the Smith Truss design and was added to the National Register of Historic Places in 1976. After a severe flash flood in 2004, the bridge was reconstructed in its former site in 2006, using most of the original timbers.

Hike or bike along the scenic Covered Bridge Trail to Rinard Bridge, which is a 7.6-mile moderately trafficked loop trail located northeast of Wingett Run, Ohio that will lead you to admire this historic bridge.

Located in the Greater Cleveland area, Harpersfield Covered Bridge used to be the longest covered bridge in America.

Now, this historic 228 ft. double-span Howe truss bridge is the third-longest covered bridge in Ohio and one of 16 drivable covered bridges in Ashtabula County.

Spanning the Grand River in Harpersfield Township, it was built in 1868 and listed on the National Register of Historic Places in 1975.

In 1913, a steel span was attached to the bridge after a flood swept away the land from the north end of the bridge.

The bridge also features a walkway that was added in 1991-1992 during renovation.

The historic Benetka Road Covered Bridge is a favorite among visitors in Ashtabula County. It is a 138-foot single-span Town lattice construction built in the 1890s.

Spanning the Ashtabula River, it is another one of 16 drivable bridges in the county. The bridge was renovated in 1985, during which a laminated arch that is 9 inches wide and 38 inches thick was added to it.

The bridge is open to vehicle traffic with unpaved roadside parking, where you can stroll, take in surrounding natural beauty, and even walk through the slow-moving stream.

The last bridge on this list is one of Ohio’s newest covered bridges, tucked away in Hueston Woods State Park, Preble County.

This is a 108-ft single-span modified Burr Arch bridge that features a timber structure with reinforced concrete foundations.

There are also 6-foot covered walkways from both sides that offer a safe area for pedestrian traffic and a nice spot to marvel at scenic views of Four Mile Creek. 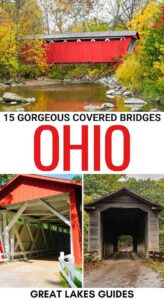 Recent Posts
We use cookies on our website to give you the most relevant experience by remembering your preferences and repeat visits. By clicking “Accept All”, you consent to the use of ALL the cookies. However, you may visit "Cookie Settings" to provide a controlled consent.
Cookie SettingsAccept All
Manage consent

This website uses cookies to improve your experience while you navigate through the website. Out of these, the cookies that are categorized as necessary are stored on your browser as they are essential for the working of basic functionalities of the website. We also use third-party cookies that help us analyze and understand how you use this website. These cookies will be stored in your browser only with your consent. You also have the option to opt-out of these cookies. But opting out of some of these cookies may affect your browsing experience.
Necessary Always Enabled
Necessary cookies are absolutely essential for the website to function properly. These cookies ensure basic functionalities and security features of the website, anonymously.
Functional
Functional cookies help to perform certain functionalities like sharing the content of the website on social media platforms, collect feedbacks, and other third-party features.
Performance
Performance cookies are used to understand and analyze the key performance indexes of the website which helps in delivering a better user experience for the visitors.
Analytics
Analytical cookies are used to understand how visitors interact with the website. These cookies help provide information on metrics the number of visitors, bounce rate, traffic source, etc.
Advertisement
Advertisement cookies are used to provide visitors with relevant ads and marketing campaigns. These cookies track visitors across websites and collect information to provide customized ads.
Others
Other uncategorized cookies are those that are being analyzed and have not been classified into a category as yet.
SAVE & ACCEPT